skip to main | skip to sidebar

U.S. Presidents Cup captain Fred Couples announced today that he has selected former U.S. Open champion Webb Simpson and phenom Jordan Spieth as his picks to fill out the American team. Hats off the Freddie for selection Spieth who is tearing up the PGA Tour with a win at the John Deere earlier this summer and a final round 62 at the Deutsche Bank Championship last weekend in Boston. Simpson was in the top ten on the Presidents Cup points race until Steve Stricker and Zach Johnson knocked him out last week. Couples said Simpson deserved a spot but he may be questionable choice given that he ranks 163rd in putting inside five feet and 165th in putting from three to five feet. The failure of Americans to make key putts last fall cost them the Ryder Cup. Dustin Johnson might have been a better pick. But give Couples credit for having the guts to pass over Jim Furyk in favor of the less experienced Spieth. The Presidents Cup will be played at Muirfield Village outside Columbus, Ohio from Oct. 1-6. 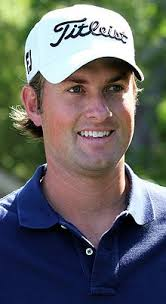 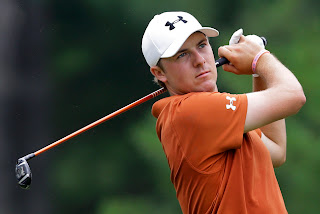 Happy New Year! What better way to get ready for 2011 than to watch the Ben Crane workout video, which is really a spoof on all those exercise routines that promise longer drives and lower scores.

Hitting range balls while wondering whatever happened to Bruce Leitzke. 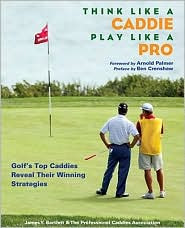 Mr. Fairway announces that a new golf book to which he is a contributor was published this spring and is available in book stores and online. “Think Like A Caddie, Play Like A Pro,” is a compendium of tips and pointers from members of the Professional Caddies Association. Mr. Fairway a.k.a. Mark Nelson got involved in the project after seeing a post on the Golf Writers Association of America web site looking for authors. Dennis Cone, who founded the Professional Caddies Association, came up with the idea last year. Six of us, including lead author Jim Bartlett, worked on the project. Mr. Fairway’s his favorite subject was Carl Jackson, who served as Ben Crenshaw’s caddie at The Masters. Carl Jackson gets a lot of credit for Crenshaw winning the 1995 Masters and it was fun to hear him recount how he helped him fix his swing. Mr. Fairway wrote the opening section of the book about Jackson and Crenshaw as well as a sidebar article about Jackson, who is a member of the PCA Hall of Fame. Crenshaw wrote the preface and Arnold Palmer wrote the forward to the book. The book includes a wealth of information that golfers can use to improve their game and lower their scores. It include sections warming up, how to play in bad weather, how to make a yardage book and other useful information. The book, which lists for $24.95, also includes a section on the PCA Hall of Fame and lots of color photos of pros and caddies. The book is available in local bookstores as well as from online sellers including Barnes & Noble and Amazon.com.

Hitting range balls while wondering whatever happened to Steve Pate.

I don’t know if saw Nike’s new commercial welcoming Tiger Woods back to competitive golf, but it’s kind of creepy, not to mention inappropriate. The commercial shows a somber Tiger listening the voice of his late father, Earl, asking him “I want to find out what you’re thinking was, I want to find out what your feelings are, and did you learn anything,” statements that originally must have been related to an experience on the golf course. But in the context of Tiger’s admitted infidelity, they take on a much different meaning. Equally troubling is that Nike would use the old man whose had left his wife and children to marry Tiger’s mother. At least Nike didn’t close the commercial with their famous tag line, “Just Do It.”

Hitting range balls while wondering whatever happened to Bobby Wadkins.

I hope Tom Rinaldi and ESPN don’t break their arms patting themselves on their backs for the exclusive “interview” with Tiger Woods tonight. That wasn’t much of an interview – five minutes – and you almost could hear the clock ticking. The “interview” was so brief that the participants did it standing up. It was nicely staged by Tiger’s public relations consultant Ari Fleischer who was President George W. Bush’s spinmeister in the White House. (Woods later said he not long employs Fleischer.) Rinaldi’s questions were lame but not as lame as Tiger’s answers. He was nicely rehearsed, falling back on family privilege, getting treatment, losing his core values, blah, blah, blah. The only good line was when he noted that “everything came to a head.” Gee, that really was the heart of the problem. Who knew the world’s best golfer was a sex addict? So Tiger will stroll among the friendly confines of Augusta National in a couple weeks, but he’s kidding himself if he thinks the questions will stop. Golf fans can move on from the sordid details of his extramarital affairs. Now it’s time to judge his conduct, which has been unbecoming, on the golf course.
Woods also gave a brief interview to Kelly Tilghman of the Golf Channel, who was suspended when she suggested that other players might want to lynch Woods because he was winning too many tournaments. Let bygones be bygones, I guess, at least when it comes to manipulating the media. Woods came off a bit more human in Golf Channel interview saying his actions were "horrific" and that he was disgusted with himself.

Hitting range balls while wondering whatever happened to Tom Wargo. 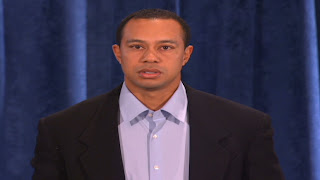 So Tiger Woods finally appeared and public and apologized for his behavior that may cost him his marriage and caused several sponsors to rethink their use of him as pitchman for his products. "I was unfaithful. I had affairs. I cheated," Woods said in a carefully controlled appearance at the PGA Tour’s clubhouse in Ponte Vedra Beach, Fla.. PGA Tour Commission Tim Finchem was in the audience along with several dozen friends and supporters. Elin Nordegren, Tiger’s wife, was not at the event. "What I did was not acceptable." Woods said he plans to return to golf. "I just don't know when that day will be,” he said. “I don't rule out that it will be this year. When I do return, I need to make my behavior more respectful of the game." Woods allowed only a handful of reporters to attend and did not take questions. Kudos to my brethren in the Golf Writers Association of America for boycotting the non-news news conference. They understood that their presence would be to serve as props for Woods. He reportedly returned to an unnamed clinic where he is being treated for an addiction to sex. Forget about the sex and the bimbos. The real test to see if Tiger has learned anything and changed as a result of all this will be how he behaves when he does return to golf. Will he be humbled? Will he be kinder to the fans? Will the swearing and club throwing stop? Will he rein in his renegade caddie Stevie Williams? That’s the change I will be looking for.

Hitting range balls while wondering whatever happened to Tommy Tolles. 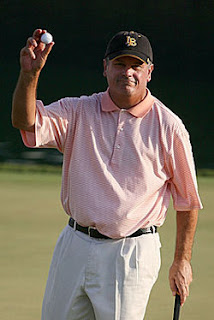 Tour pros hate the word “choke” because it conveys weakness. But if the word fits, use it. I’m talking about Paul Goydos who threw away a chance to win the AT&T National Pebble Beach Pro-Am on Sunday. (Perhaps it's time to undo the top button on your golf shirt, Paul.) Goydos had a one shot lead over eventual winner Dustin Johnson as they stood in the 14th fairway and watched Bryce Molder make a quadruple bogey nine up on the green. Goydos told Johnson that Molder had put his third shot in the worst place to be on the hole, short and left of the green. Guess where Goydos his ball? Bingo. His fourth shot wedge rolled off the back of the green. Just like Molder before him, his next shot failed to make it on and rolled back to his feet. He hit the next one and three-putted for his nine. He finished with a 78, four shots behind Johnson and a T-5 finish. Just last week, Ryder Cup captain Cory Pavin selected Goydos to one of his assistants for the matches this fall. Wonder if he will be giving mental advice.

Hitting range balls while wondering whatever happened to Wayne Levi.

Mr. Fairway
Mr. Fairway’s love affair with the game of golf began in junior high. He once made his living as a journalist covering high school sports, cops and robbers and politics. Today, Mr. Fairway is a public relations consultant and a widely-published freelance golf writer. His current USGA handicap index is 9.3 and he averages 50-plus rounds a year.